The Poverty Creek Trail System is an extensive set of trails located about 20 minutes northwest of Blacksburg, Virginia. Primary activities include mountain biking, trail running, hiking, hiking with dogs, and horseback riding. Most of the trails are multi-use but some near Pandapas Pond do not allow mountain biking or horseback riding. All of the trails are clearly marked with full size maps at many of the intersections. Parking is free, abundant, and accommodates horse trailers. There are two parking lots on the east side of the park. One for mountain biking and horseback riding and the other for hikers seeking access to trails around Pandapas Pond. The lot for mountain biking and horseback riding does not have water or restrooms but the Pandapas Pond trails do include restrooms. In addition, there are spots to park along State Route 708 that provide access to the trails in the center of the park. Finally, Heritage Park includes parking and access to the trail system. Cell phone service is weak while on the lower elevation trails. A shooting range is nearby so gunshots can be heard while in the park.

Poverty Creek trail is 7.2 miles long and multi-use. It serves as the main artery for a system boasting 17 miles of trails. The following is an elevation chart generated using my Google Android phone.

From the parking lot, the trail starts fast because it is wide, smooth, and descending. It is very beginner friendly because of its characteristics. Further, I found it suitable for testing out new clipless pedals because I have fallen over a dozen times without injury. There are only a few rock gardens and the trail is wide in many places. 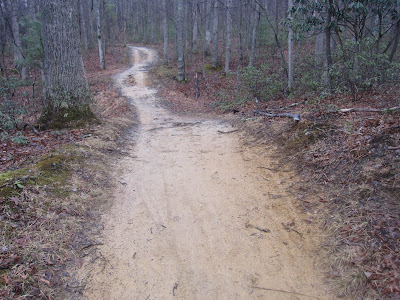 The following picture shows the first climb (although rarely is there snow on the ground). I had no problem climbing this hill on my single speed Niner SIR 9.

The middle section is primarily flat as it traverses lowlands near State Route 708 and Poverty Creek (the stream). 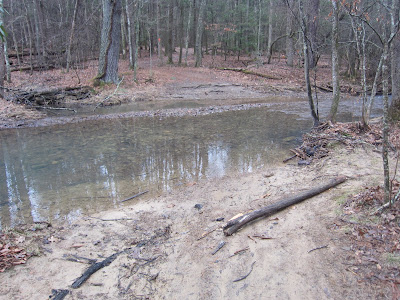 The second stream crossing is a quick dip. A close look at the subsequent picture shows an orange diamond on a tree and which is used to denote this trail.

The width and depth of the stream crossings can vary widely depending on the level of rainfall and snow melt. The next picture shows the second stream crossing again but this time it is dry. Also, it is my experience that the Carvin’s Cove trails dry out quicker than the ones at Poverty Creek so that is something to consider when planning a ride.

There is a ramp located a few feet south of State Route 708.

The following picture shows where the trail crosses State Route 708; which marks a significant shift in elevation grade. From this point, the trail climbs steadily for a couple of miles; as depicted in the elevation chart above.

It can include fallen trees that are most likely to be seen after windy storms.

Most of the climbs are gradual, straight, and smooth so endurance, not skill, is the only requirement for conquering them.

Here is what it looks like in the summer.

After a prolonged climb, it begins a gradual descent and becomes a little technical (i.e., narrower and curvier).

The following picture highlights a view to the south that is most likely only visible in the Fall and Winter. In addition, it is an opportunity to point out that this trail is well shaded during the spring and summer.

The last mile is the most challenging and, also, the most remote so you are less likely to see other people. The western half of the Poverty Creek trail is the starting point for the Rowdy Dawg mountain bike race; read my race blog post to see pictures taken while riding west to east. The following picture shows where the trail ends at the State Route 708.

The Horse Nettle Trail is 3.0 miles long and ascends over 600 feet (from 2,100 to 2,700 feet), when riding from the eastern parking lot to the western end. The following elevation chart accurately represents the unrelenting climb when riding east to west. On second thought, Dragons Back’s Deer Trail better fits the description of unrelenting because at least Horse Nettle levels off in spots.

A short stretch of single track dips into a small ravine that is capable of accumulating enough water to cover the trail, as I experienced on my first ride.

After a short stretch of single track, the trail opens up and runs along the edge of a ridge, all while maintaining a consistent incline.

At the half way point, it turns right onto a gravel forest service road and the climb continues. I’ll know I am in solid mountain biking shape when I am able to ride this trail without taking any breaks.

After passing the intersection with the Snake Root trail, Horse Nettle has a quick descent down an old dirt road. It ends at a three way intersection that includes Old Farm trail (a.k.a., Gateway Trail) and Jacobs Ladder trail, both of which are long and fast descents from here.

The trail cruises along the side of a steeply sloped ridge (seen in the following picture) and includes lots of leaves and branches.

After navigating a dense set of tree roots, you’ll complete the trail by crossing Poverty Creek (the creek) and then reaching the intersection with Poverty Creek trail.

At the top, it is scenic with views to the north.

As is illustrated in the elevation chart, the first section is steep. It includes several tight turns, some of which I had to walk.

It gradually becomes less technical with wider turns and smoother trail. For my intermediate skills, I found this single track to have a fun collection of moderately challenging turns. I prefer this trail to Jacobs Ladder’s straight downhill ride because it bobs and weaves through the forest.

The latter part of this ride rolls gently and is fast in some parts.

The Old Farm/Gateway trail is a 1.6 mile climb of over 600 feet in elevation; from 2,000 to 2,600 feet. The following elevation chart estimates the challenging climb gradient on a ride from the Heritage Park parking lot to the end of the Old Farm trail.

The subsequent elevation chart was recorded during my ride down the trail.

Gateway trail starts across the street from the Heritage Park parking lot on Meadowbrook Drive.

The Old Farm/Gateway trail is a laborious climb that includes a mix of smooth and rugged singletrack along with tight switchbacks.

The most challenging aspect is ascending tight switchbacks that include a large web of tree roots. On my first ride up, many of these turns forced me to get off my bike because I was too out of shape to maintain enough speed to bounce over the tree roots.

At times, the trail is wide and level but for the most part it is an unrelenting climb that is sure to test your endurance.

The trail is nearing its end when you reach the following stretch of rocks. The ride down is challenging because of its tight switchbacks but the tree roots are less of a factor because downhill momentum will help your bike roll over them.

It ends at an intersection with the Horse Nettle and Jacobs Ladder trails. I recommend riding Horse Nettle before Old Farm because Horse Nettle includes the same amount of climb but is less technical. In addition, a ride up and down Old Farm can be combined with a cyclocross ride on the grassy hills of Heritage Park because they share the same parking lot.

May Apple is a 1.0 mile flat, smooth, and wide dirt trail that intersects with the Poverty Creek and Snake Root trails. The following chart was recorded riding west (Poverty Creek) to east (Snake Root).

It starts by crossing Poverty Creek (seen in the following picture).

It ends with a narrow log bridge that, honestly, I have yet to muster up the courage to cross.

After crossing Poverty Creek (the creek), it weaves through dense shrub growth.

It includes some nasty tree roots that forced me to dismount. It is the least fun trail I have ridden in the system or maybe on the day I rode it I was too fatigued to enjoy its challenges.

The Royale trail is 0.9 miles long and ascends 250 feet when riding south to north (i.e., riding from Poverty Creek to Prickly Pear). The climb up Royale can serve as a test to determine if you’re ready for the 600 foot climb up the Old Farm trail. 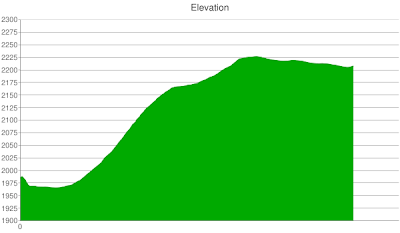 The following picture was taken from the beginning of the north end of the trail. It is marked as moderate in difficulty but is easy when riding north to south.

Prickly Pear connects Royale and Skullcup. It is challenging with numerous rock gardens and challenging climbs, one of which is almost 100 feet. 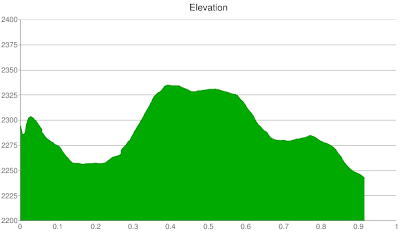 It is similar to Skullcap and Trillium in that it rolls up and down the ridge and includes both technical and easy sections. 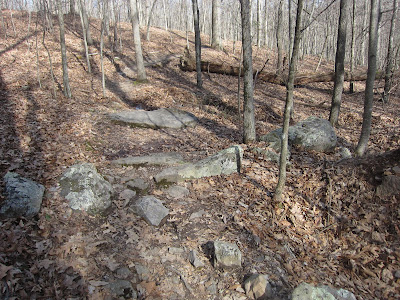 The Trillium trail is a 1.1 mile single track that connects Poverty Creek and Skullcap. The following elevation chart was recording riding east.

The western half is easy because it is smooth and fast.

The middle section meanders through a dense forest.

The eastern half is full of rock gardens and includes one prolonged climb.

Skullcap trail is 1.6 miles long, has a range in elevation of 200 feet, and includes a combination of both rocks and tree roots. 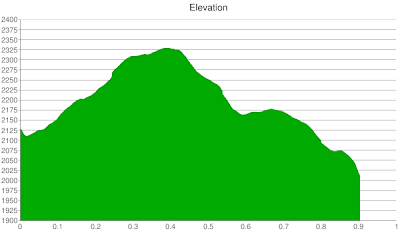 It is more technical than Poverty Creek and Trillium and includes one tough climb. I recommend riding east to west (i.e., from Trillium to either Prickly Pear or Queen Anne) because the climb in the other direction is straight up and seems impossible to do without walking. 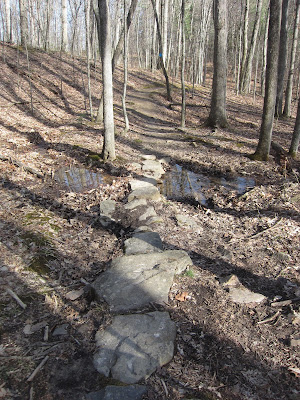 The following picture is backwards looking and shows a two foot drop.

The Queen Anne trail is 0.8 miles of fast, smooth, and descending singletrack that connects with Skullcap and ends at State Route 708.

The following picture shows this trail ending at State Route 708. The final 100 foot approach to State Route 708 contains a set of gnarly tree roots hiding under leaves and that caught me off-guard. A quick on jaunt on State Route 708 can connect you to the Poverty Creek trail.

From the Poverty Creek trail, the Indian Pipe trail is a 0.4 mile fast, almost straight down hill descent that ends at FS 708. Riding down it is easy but climbing it is challenging because it starts steep, levels off, and then finishes steep. The following chart was recording while riding up.

It includes two unique features that are fun in the downhill direction. First, there is a ramp with which to jump off.

In sum, the Poverty Creek Trail System is a fun set of trails that should be attractive for beginners and experts. The following are my rankings for mountain biking trails in the region: