Heritage Park is located five minutes northwest of downtown Blacksburg, Virginia and off of Glade Road. Primary activities include family hiking, running, and dog walking but horses and motorized vehicles are not allowed. Mountain bikes appear to be allowed but the trails are better suited for cyclocross riding, walking, and running. There are two free parking lots: one off of Glade Road and the other off of Meadowbrook Drive. The Meadowbrook Drive parking lot also serves as the parking lot for the Gateway mountain bike trail in the Poverty Creek Trail System. There is no water or restrooms at either parking lot but free pet waste bags are provided. The following Google Map shows recorded GPS coordinates for our walk on the paved trail that goes from the Glade Road parking lot to the Meadowbrook Drive parking lot. In addition, it includes GPS coordinates recorded while biking on the grassy trails. Cell phone service was strong while in the park. 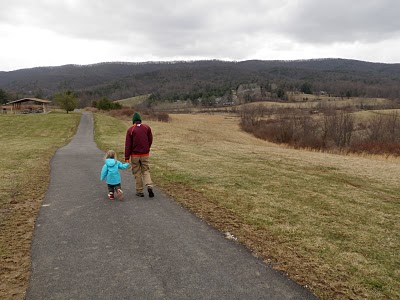 There were several bird boxes near the trail. Do you know what species these boxes are targeting? 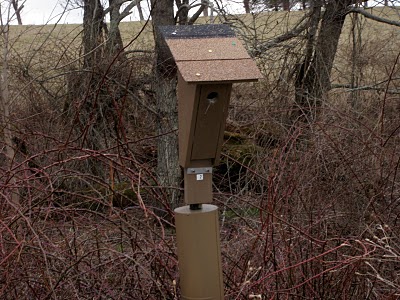 A person we talked to on the trail said that the following area was under water as recently as Saturday. 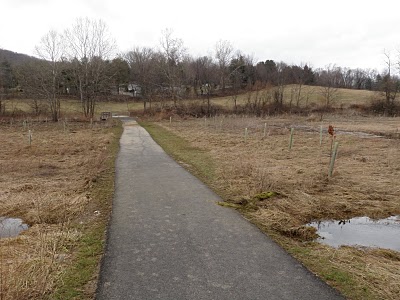 It looks like the paved trail connects to the network of grass trails but we could not find a suitable place to cross the stream because it appeared to be running higher than normal.

In addition to a paved trail, there are several grass trails totaling about 2 miles. Heading east from the Glade Road parking lot there is a pond with an accessible shoreline for identifying aquatic plants and animals.

The subsequent picture is a better view of the pond.

The following pictures are from the southern most grassy loop and were taken on a sunny October day. There is no shade on the trail so proper sun protection is advised.

All of the hills in the park are small so elevation changes are minimal. The following elevation chart was recorded on a bike ride that started from the Glade Road parking lot and headed east and south around the largest grassy hill loop.

The subsequent picture peers north to the mountains that are home to the Poverty Creek Trail System.

In March, the following picture was taken on the northern set of grassy trails. The grassy trails include a couple of interlocking loops with climbs and terrain similar to that of a cyclocross race course. 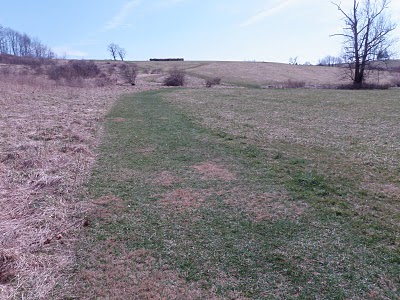 In sum, Heritage Park is a low stress and peaceful place to visit that, because of its close proximity to Blacksburg, is ideal for repeated visits by families, dog owners, and cyclocross riders. Other trails in the New River Valley include: