Hall Ranch is located in Lyons, Colorado. Primary activities include mountain biking, horseback riding, and hiking. Dogs, camping, and motorized vehicles are not allowed in the park. There are three free parking lots, restrooms, and enough space for horse trailers but no water fountains. Cell phone service was intermittent while in the park. We parked in the southern set of lots, which was reached by taking US-36 west to Lyons, turning left onto CO-7 heading south for one mile, and taking a right into the trail head area. Of the three parking lots, we started from the southern most one that accesses Bitterbrush trail. The lot a little north was larger and had space for horse trailers. 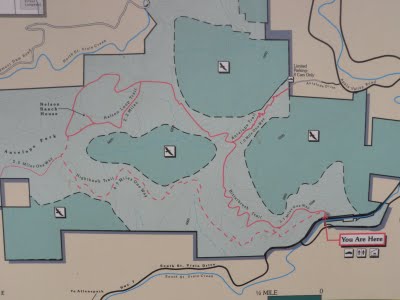 Of the 14 miles of trail, all are accessible for hiking and 6.9 miles allow mountain biking. Bitterbrush trail is 3.7 miles long, starts just above 5,400 feet in elevation, and finishes at the beginning of the Nelson Loop at 6,400 feet. 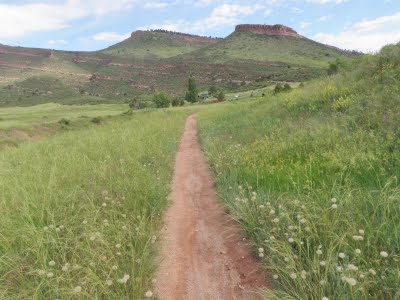 The first 1.25 miles were fast and rolling with some climbing mixed in. Bitterbrush intersects with a couple of old dirt roads which were in the process of being revegetated and assimilated into the park’s natural habitat and, thus, it was important to stay off these dirt roads (seen at the bottom-right of the following picture). 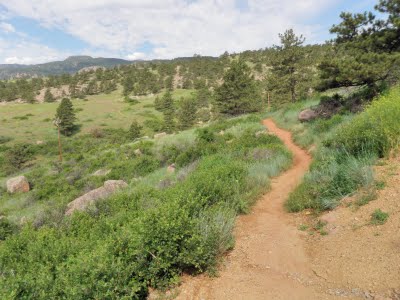 We found the next 0.5 miles of trail to be very challenging because all at once it became steeper, rockier, and curvier.

We had to dismount in several places because the rocks narrowed beyond our skill level. In fact, when we returned through this section my riding partner wiped out face-first attempting a very technical downhill, 90 degree left turn.

After the boulder field, the next 0.3 miles was a long, steady climb with some switchbacks to ease the incline. Thank you to Matt for taking pictures which allowed me to be seen chugging along at a slow, steady pace. 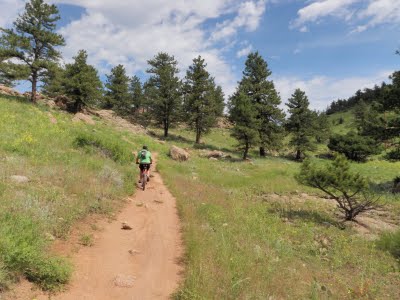 The trail continued to the top of a ridge and was designed to protect three wildlife habitats: one to the east, one to the north, and one to the west. At this point in the ride, the trail had climbed 600 feet; from 5,400 to 6,000 feet.

After crossing the top of the ridge, the trail dipped down for a fast descent. Not seen in the subsequent picture is a park bench conveniently located for taking a breather and eating a snack after a long climb. 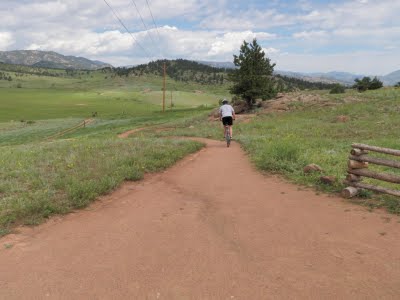 The following picture is backwards looking and shows the intersection between the Bitterbrush and Antelope trails. We did not ride on the Antelope trail but several bikers who did said its 1.0 mile stretch was significantly easier than the 2.5 miles of Bitterbrush that lead us up to this intersection. The ride from the Antelope parking area is easier because it is less rocky and only requires a climb of 400 feet (5,600 to 6,000 feet) versus the 600 feet we did. However, the Antelope parking lot is really small so on a busy day it can be tough to find a spot.

From the intersection with Antelope, Bitterbrush continued another 1.2 miles to the Nelson Loop trail and included another 400 feet of elevation gain to an altitude of 6,400 feet.

We were exhausted by the time we reached the Nelson Loop trail but were holding out hope that we must be due for some fast downhill after all of our climbing. We rode clockwise around the 2.2 mile Nelson Loop and experienced another 300 foot gain in elevation. The protruding rocks seen in the distance of the western half the park are igneous (e.g., Longs Peak) whereas the rocks in the eastern half are sandstone.

After passing the intersection with the hiking-only Nighthawk trail, the northwestern half of the Nelson Loop transitions into a very fast downhill (i.e., 300 feet of decline) as can be seen in the following video.

This loop reminds me of the Indian Summer Loop (via Blue Sky) because of its manageable switchback climbs, smooth trail, and fast descents. The following picture captures the view to the north as we sped downhill.

Our return on Bitterbrush trail was less exhausting because it was primarily downhill. However, we walked some of the boulder fields seen earlier in this post because they were too technical for us to safely maneuver. The last picture was taken riding east on Bitterbrush and before reaching the intersection with Antelope. The total distance from the beginning of Bitterbrush, around the Nelson Loop, and back was almost 10 miles.

In sum, the latter half of Bitterbrush and the entire Nelson Loop are fast, fun, and challenging single track trails. On the other hand, the beginning has extremely challenging rocky terrain that may not be fun for everyone. The rest of park can be explored without the rocky terrain by starting on the Antelope trail. For more fun, view my list of other mountain bike trails along the Front Range and my pictures of Valmont Bike Park.