Plains Prickly Pear Cactus (Opuntia polyacantha) is a succulent, perennial shrub found in sunny prairie grasslands and on dry hillsides at elevations ranging from 4,000 to 7,500 feet. Prickly pear cacti are easy to identify because there are limited numbers of cacti of its size in Colorado. It is forms clumps of oval pads, each of which can grow to be six centimeters long and contain rows of sharp spines. Its flowers bloom copper, yellow, or pink in May and June.

The plains prickly pear cactus is an important member of the prairie food web. Specifically, wasps, bees, moths, and butterflies eat nectar from the prickly pear cactus flowers. Further, birds and mammals (e.g., rabbits, coyotes, deer, fox, prairie dogs) eat its fruit, stems, and seeds. Wildfires can burn off the spines making it easier for mammals to ingest. Finally, insects and reptiles use it for shelter and protection.

The following pictures were taken during our hike in Colorado National Monument and include a couple of blooming plants. 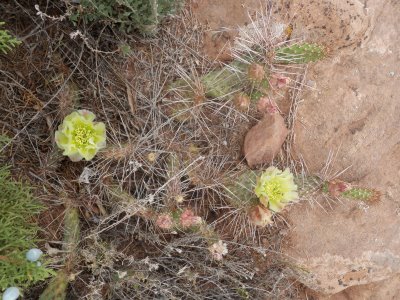 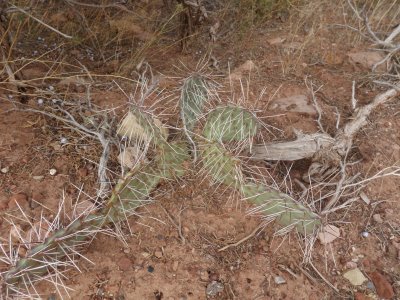 Joe Shaw from http://www.opuntiads.com has identified the following as Opuntia phaecantha.

The following blooming prickly pear cacti are from Pothole Point Trail in Canyonlands National Park. In addition, Joe Shaw has identified the next two as most likely being Opuntia phaecantha. 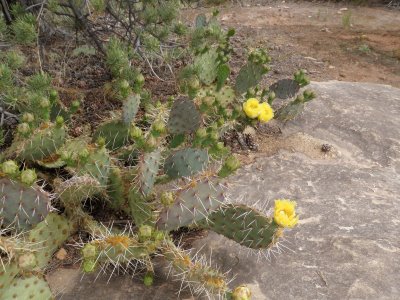 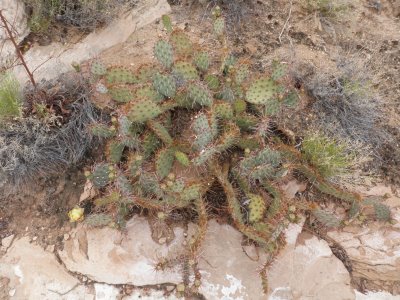 The following prickly pear cacti are from the Hogback trail in Lathrop State Park: