We visited Canyonlands National Park’s southern set of trails which are located 75+ miles southwest of Moab, Utah. Reach the south entrance by driving 40 miles south on US-191, turn right on UT-211, and drive 31 miles to the Needles district visitor center. The park has a northern entrance which is much closer to Moab but the two areas are isolated from each other. Primary activities for Pothole Point trail include hiking and hiking with kids but hiking with dogs and mountain biking are not allowed. A week long pass was required to enter the park. The Needles district visitor center has water and restrooms but the trails do not have either. Cell phone service was not available while in the park.

Pothole Point trail is a 0.6 mile loop with unnoticeable changes in elevation and at around 5,000 feet. The only challenging aspect of is the long drive it takes to get there from Moab.

It is important to stay off of the cryptobiotic soil, which can be seen on both sides of the trail in the following picture. Other interesting vegetation near the trail includes Plains Prickly Pear Cactus.

The trail quickly transitions from dirt to slickrock, which contains numerous depressions called potholes. Carbonic acid rain and windblown sand grains deepen the potholes. Heavy rains can fill them and create a water environment suitable for tadpole shrimp, clam shrimp, spadefoot toads, and red-spotted toads. Many of the organisms survive the dry season by laying drought-resistant eggs in the mud. It is important to preserve the natural ecosystem in each pothole by staying out of them because the limited rain is crucial to many of the native organisms’ survival.

This hike is fun for kids because it is short, flat, and full of interesting rocks to explore. The kids on our hike had fun identifying the cairns we needed to follow to stay on the trail; see a little one in the back left of the following picture.

The landscape opens up on the western half of the hike to expose views both near and far. 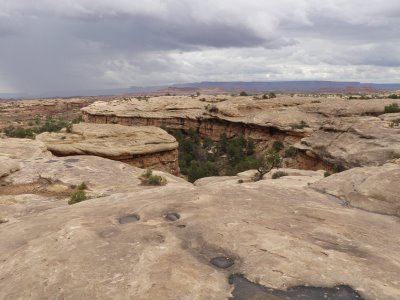 The following panoramic picture illustrates the breadth and depth of Canyonlands’ geology.

Needles (red and white pinnacles), canyons, fins, arches, spires, buttes, and mesas can be seen by looking west and south.

The geological formations in Canyonlands are formed by weathering and erosion against sandstone, a sedimentary rock. 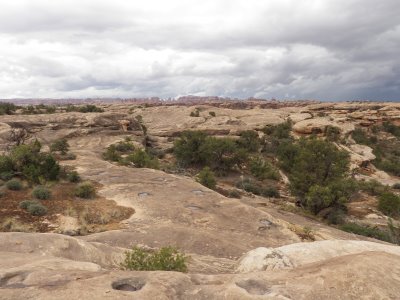 We had a two year old and a three year old that enjoyed leading us around the trail. The 0.6 mile hike was enough to stretch out their legs after an almost two hour drive but not enough to wear them out, so we headed to Cave Spring trail for more exploring. 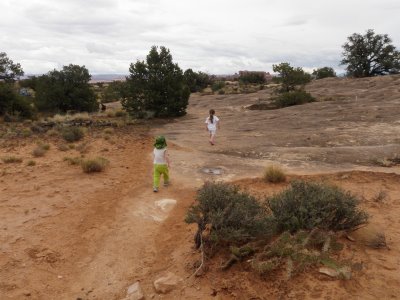 The following video highlights a 180 degree view we experienced.

In sum, Pothole Point trail is ideal for anyone, especially families, seeking a quick, easy hike that features some of Canyonland’s majestic geological formations.