We visited Canyonlands National Park’s Needles District which is located 75+ miles southwest of Moab, Utah. Reach the Needles District entrance by driving 40 miles south on US-191, turn right on UT-211, and drive 31 miles to the Needles District visitor center. The park has a northern entrance, Island in the Sky District, which is much closer to Moab. However, the two districts are not connected by roads. Primary activities for Cave Spring trail include hiking and hiking with kids but dogs and mountain biking are not allowed. A week long pass was required to enter the park. The Needles district visitor center has water and restrooms but the trail heads do not have either. Cell phone service was not available while in the park.

Cave Spring trail is a 0.6 mile loop with less than 100 feet change in elevation and starting at around 5,000 feet. The trail’s limited elevation changes and short length make it ideal for hiking with children. It is important to stay on the trail to protect cryptobiotic soil and other vegetation that includes Prickly Pear Cactus and Rubber Rabbitbrush. 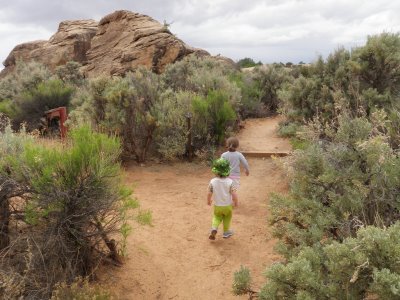 The caves served as natural campgrounds for cattle ranching cowboys from the 1800s until 1975. The following is an on-trail exhibit that recreates a cowboy’s camp. 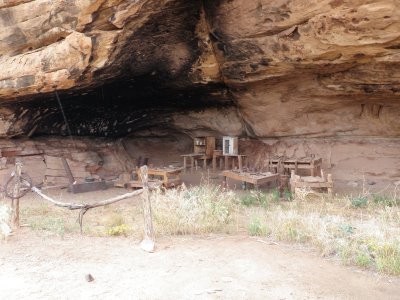 Unlike most of the Canyonlands trails, Cave Spring trail’s caves can provide much needed cover from sun and rain. What’s more, the caves provided the cattle ranching cowboys with a dependable, year-round water source in an otherwise dry region because rain water seeps through the porous sandstone and collects inside the cave. There are several interpretive stations that annotate these on-trail exhibits. 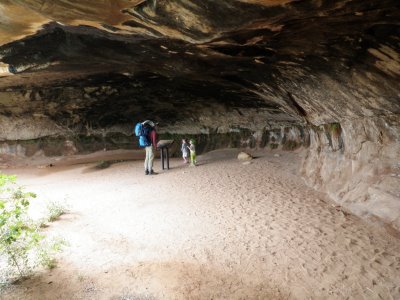 Ancestral Puebloan Indians also valued the caves for their shelter and water supply. The following pictographs are evidence of the Puebloan Indians’ presence from 700 to 1,000 years ago.

Hiking clockwise, we climbed up two ladders. We deemed the ladders unsafe for our two year old and three year old so we carefully carried them up in child carrier backpacks. 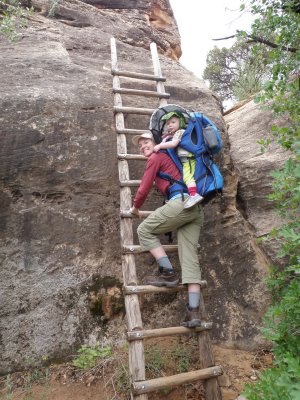 The second ladder is less of an issue because it is shorter and less steep.

After climbing the ladders, the trail transitions from dirt to slickrock and trades interpretive stations for unobstructed views.

The slickrock and accompanying views are very similar to those experienced on the Pothole Point Trail; which is another kid friendly trail in Canyonlands National Park.

The following picture peers south for a view of distant rock formations. 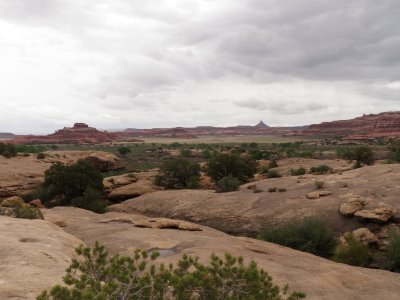 The slickrock portion of the trail is marked by cairns; one of which can be seen at the bottom of the subsequent picture.

Cave Spring trail highlights the dichotomy between the extremely dry slickrock and the spring fed soil hosting vegetation near the caves; as can be seen in the following picture. 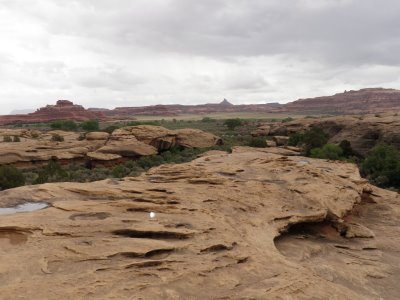 Hiking clockwise, Cave Spring trail drops back down to a dirt path without the need of ladders nor a steep drop. Thus, it is possible to hike counter-clockwise up to the slickrock without having to worry about crossing the ladders.

In sum, Cave Spring trail was a surprisingly scenic trail with several interpretive stations that provide an interactive look at the area’s rich history and culture. It offers views to the south so check out Big Spring Canyon Overlook for views to the north.