The Pilot Knob Ridge Preserve is located in Lake George, New York on Pilot Knob Road, near the intersection of Ridge Road. It has been renamed the Schumann Preserve at Pilot Knob in honor of Lynn LaMontagne Schumann. Hiking and dog walking were the primary outdoor recreation. Free parking for about dozen cars was provided but on the road and neighboring properties was prohibited. There were no restrooms or water. In addition, motorized and non-motorized recreational vehicles were not allowed. Dogs must be kept on a leash and waste bags were not provided. My cell service was at a medium strength in the park. Lastly, there were free pamphlets that provided a brief history and general information about the preserve.

Over the span of several years, we’ve hiked the Orange trail loop three times. From the parking lot, it was about 1.2 miles round trip and ascended 600 feet.

From the outset, it was steep and rocky. The thick forest canopy provides some relief on a hot and humid day but also shelters moisture; thus, rocks can be slippery several days after a rainfall. 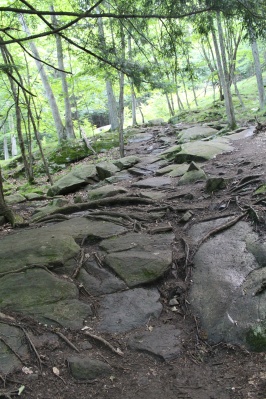 The rocks and tree roots in combination with the steep slope made it challenging for our three and six year old children. Our six year old made it to the gazebo with some encouragement but our three year old spent a significant amount of time riding on my shoulders.

At about the quarter mile point an intersection offered two options, both of which lead to a gazebo. We turned left and hiked clockwise on the loop. In this direction, it continued to be rocky. If you’re not having fun on the rocky terrain then I recommend turning right because in 2012 an easier route to the gazebo was constructed.

The picture below shows the last section of the Orange trail before it reached the gazebo.

We saw Interrupted fern and Christmas fern. Some other plant life in the preserve included red oak, striped maple, and white birch. The most common wildlife seen were the gray squirrel, eastern chipmunk, and Fowler’s toad. Other examples of wildlife but are less commonly seen in the preserve are moose, coyote, wild turkey, and great horned owl.

A gazebo was added to land that was formerly the site of an illegally built house. The house has since been confiscated by the authorities, torn down, and converted into a scenic viewing area. We used its two shaded benches to have a picnic lunch. In addition, we used a ChicoBag backpack and LunchSkins sandwich bags to carry our water and food. 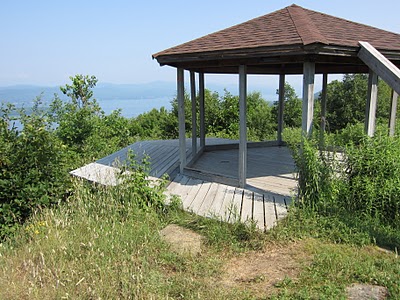 The view was panoramic and contained the middle and southern parts of Lake George.

Notably, it offered a detailed view of the southern half of the lake. 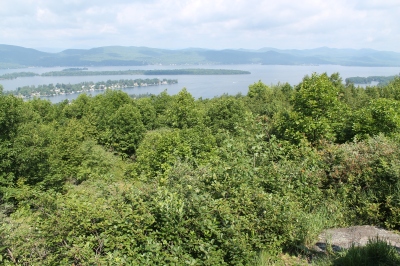 The following video was record in 2010.

This next video was recorded in July 2013 and shows two recently added benches.

In 2012, the southern half of the Orange trail loop was rerouted. Previously, it traversed an old paved driveway. Unlike the other half of the loop, which reused an old four wheeling path, the new route was created specifically for hiking. 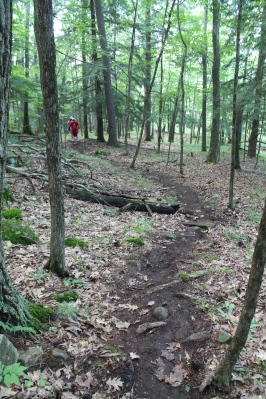 It was narrower but significantly smoother. What’s more, it had several switchbacks that mitigated the challenge of the steep slope. It had a few rocky sections but nothing like the other half of the loop. I recommend this half of the Orange trail for kids and anyone wanting smoother terrain.

During the 2013 Hike-A-Thon, we missed the helicopter photo shoot because we were still hiking the Blue trail loop. From the gazebo, it was 1.3-miles to the waterfall with an additional elevation range of 200 feet. The following elevation chart was generated by hiking all of the trails in the preserve in this order: up to the gazebo on the northern half of the Orange trail (i.e., clockwise), the Blue trail counter-clockwise, and back to the parking lot on the southern half of the Orange trail. The total distance was 3.7 miles.

The Blue trail took us farther up the mountain. 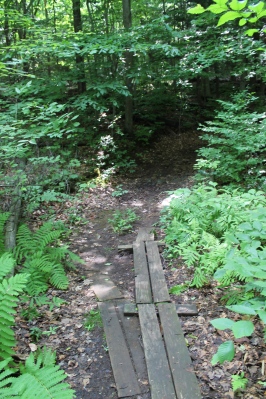 It was wider and smoother than the Orange trail. Although the terrain was easier, we left our kids with their grandparents at the gazebo because we didn’t think they could the manage the additional 2.5 miles of hiking. 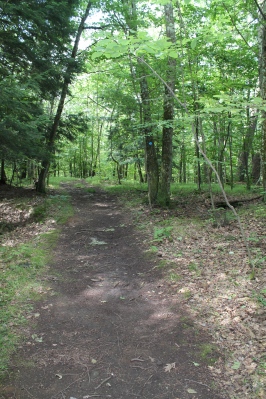 It was deceptively challenging because the slope changed orientations from incline to decline and back to incline before reaching the waterfall. 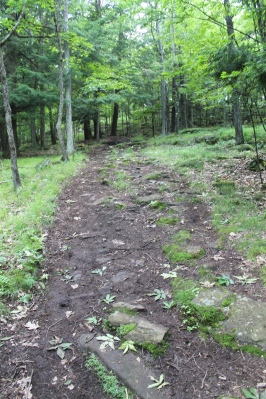 It was mostly out and back as the loop portion was short. We hiked the loop counter-clockwise and, as a result, crossed the stream’s lower section first. The use of the term waterfall was a little deceiving and I describe this area as a section of trail that crosses a mountain stream twice.

We were there in July after a week of heavy rain so I wouldn’t expect the water flow to be as strong during periods of normal rainfall. The next video was shot from the lower stream crossing.

The upper stream crossing was similar to the lower one.

In sum, we’ve had a lot of fun hiking here because it was close to Lake George Village, easy to find, and offered great views of the lake. Berry Pond Preserve, Buck Mountain, Thomas & Cat Mountains, and Pilot Knob Mountain are similar in difficulty and length. On the other hand, Amy’s Park, Inman Pond, and Shelving Rock Falls are easier and shorter.