Reservoir Ridge Natural Area is located 15 minutes northwest of Fort Collins, Colorado. Primary activities are hiking, mountain biking, horseback riding (with trailer parking), and dog walking. There are two free parking lots, each of which has a restroom and free pet waste bags, but no water. From downtown, the parking lot on the east side is 15 minutes away and the lot on the west side is 30 minutes away. Cell phone service was available while on the east side of the park.

Hiking from the West Parking Lot in March 2013

On Friday March 15th, 2013 I visited Fort Collins for the first time since we had moved away in 2009. I was driving to hike Arthur’s Rock and was turned away because of the unfortunate Galena Fire that had just started in Lory State Park.

Determined to do a hike on an otherwise beautiful day, I chose to revisit Reservoir Ridge using its west parking lot.

In a clockwise direction, I hiked a loop of almost three miles and which extended to both the north and south edges of the park. There was significant changes in elevation because the eastern half of the loop drops two hundred feet.

The trail was steep to start and then it transitioned to a gradual climb.

Interpretive signs described how the ridge was formed and that it was once a prehistoric seashore. The designated overlook area was worth checking out because it offered an expansive view to the north.

After the overlook, the trail turned east and downward.

The eastern half of this loop was rockier and contained switchbacks that resulted in an elevation gain of over 200 feet. This was the most difficult section of the loop and especially so for mountain biking. 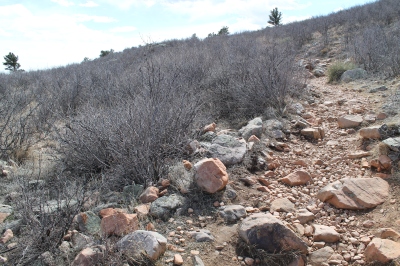 The previous picture features an abundance of true mountain mahogany around the trail. The next picture highlights its unique seed, which coils and uncoils with changes in humidity.

To continue on an extended loop I stayed left at an intersection and followed the trail south until I reached a sign for the Foothills trail. The loop would have been about a mile shorter had I turned right instead. As is seen in the elevation chart above, the trail levels off for a stretch before crossing the top of the ridge.

After I crossed over onto the west side of the ridge, I turned right at an intersection and headed north.

The Foothills trail lead me back into the Reservoir Ridge Natural Area and, subsequently, to the parking lot that I had started from. 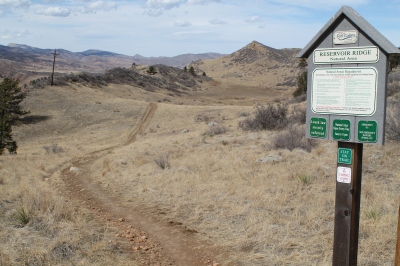 Hiking from the East Parking Lot in November 2008

The following hike was a 3.0 mile loop with a total elevation gain of 400 feet. It began at the east parking lot, connected to the Foothills trail, and looped around on the Reservoir Ridge trail. For longer hikes and bike rides, the Foothills trail can be traveled south to the Maxwell and Pineridge natural areas.

The Fort Collins Foothills trail starts at an elevation of ~5,200 feet. From the east parking lot, the first stretch was smooth, flat, and almost wide enough for two people across. Notably, it only provided shade at dawn and dusk.

The Foothills trail intersects with the Reservoir Ridge trail in several spots. We continued past the first intersection and, thus, hiked the loop clockwise by taking the next available right turn. The extended loop described above travels even farther south than this loop.

Despite the housing developments to the west, the western half of the park provides a quiet break from city sights and sounds.

Views to the north include the Poudre Canyon in the distance.

True mountain mahogany can be seen in the foreground of the following picture. In addition, great plains yucca was seen near the trail. The eastern half of the loop drops back down to the Foothills trail, which lead us back to the east parking lot. 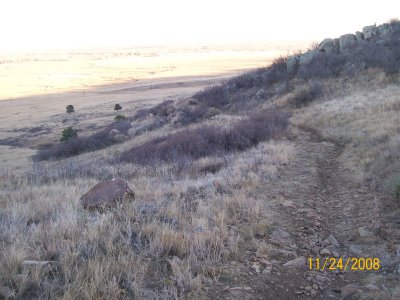 In sum, this is an ideal hike for visitors looking for a scenic Colorado experience that is low stress (i.e., short drive, easy hike). Further, residents frequent this natural area to walk their dogs and/or for exercise. Mountain bikers can reach the trail from town by biking on roads and can experience one of the more challenging rides in the area.