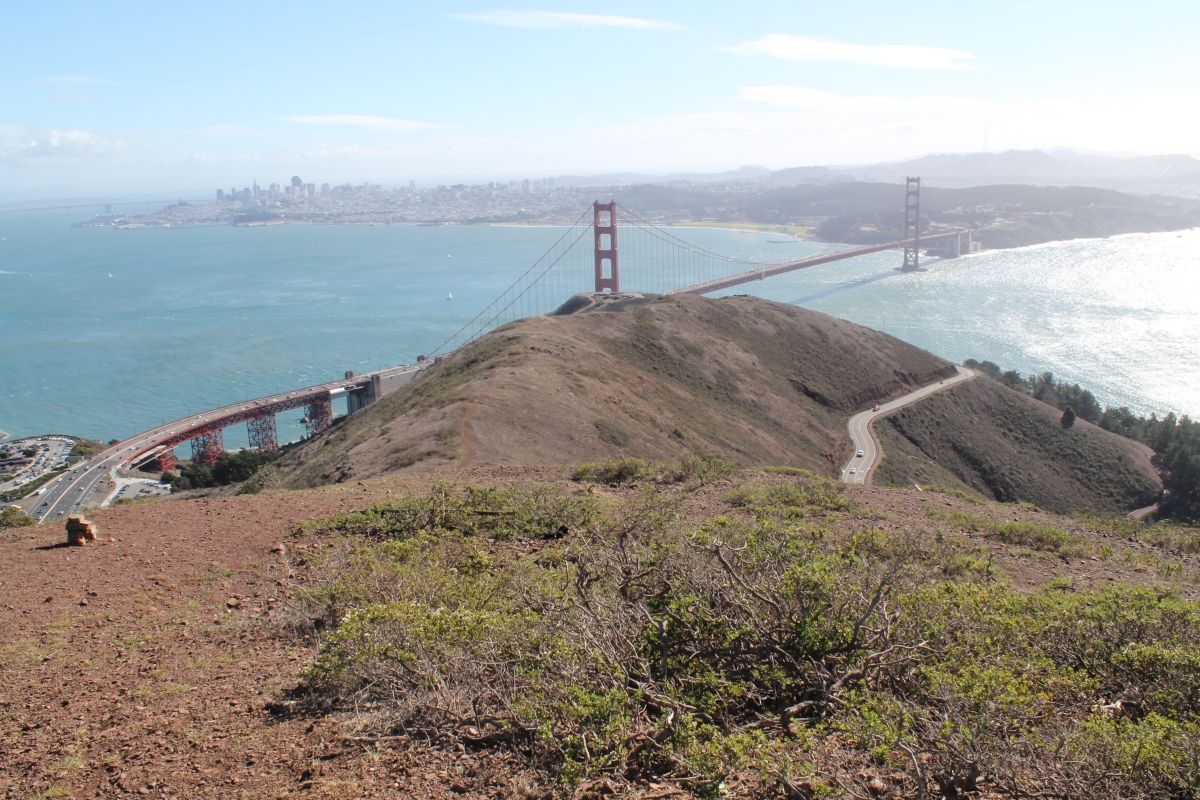 Slacker Hill was located two miles northwest of the Golden Gate Bridge and inside the Golden Gate National Recreation Area. We arrived there by taking exit 442 off of US 101 and then followed Conzelman Rd to its roundabout intersection with McCullough Rd; where there was a small, free parking area. There was a restroom and space for about 10 cars but no water. Although dogs, mountain bikes and horses were allowed on connecting trails, they were prohibited on sections of this hike. My cell phone service was intermittent.

On the Coastal trail, we walked a short distance and then crossed McCullough Rd. 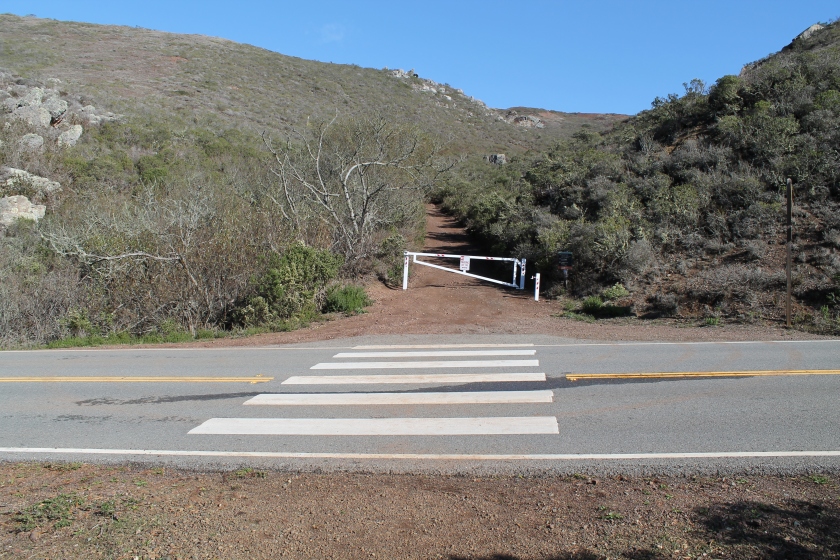 The trail was wide, steep, and smooth. Our older children, ages eight and five, did well while our youngest, age two, needed to be carried most of the way. 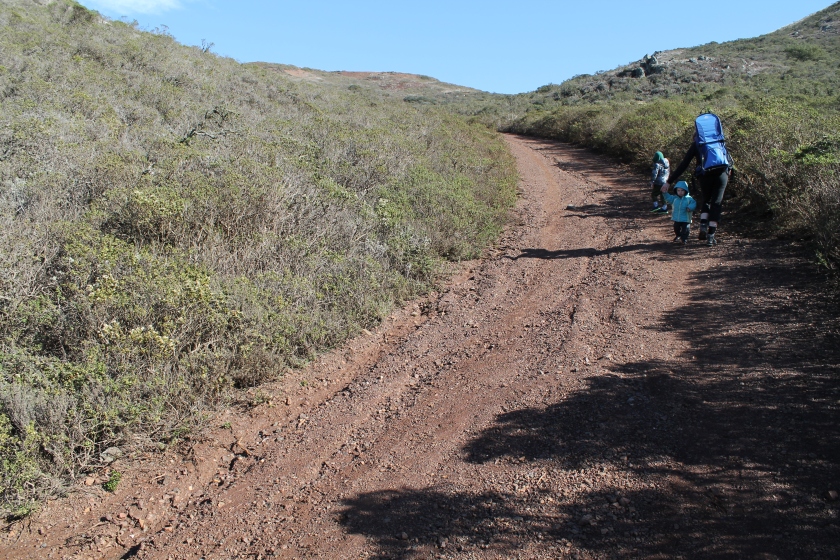 After a short distance, we were able to see the Pacific ocean and grateful to have clear blue skies. 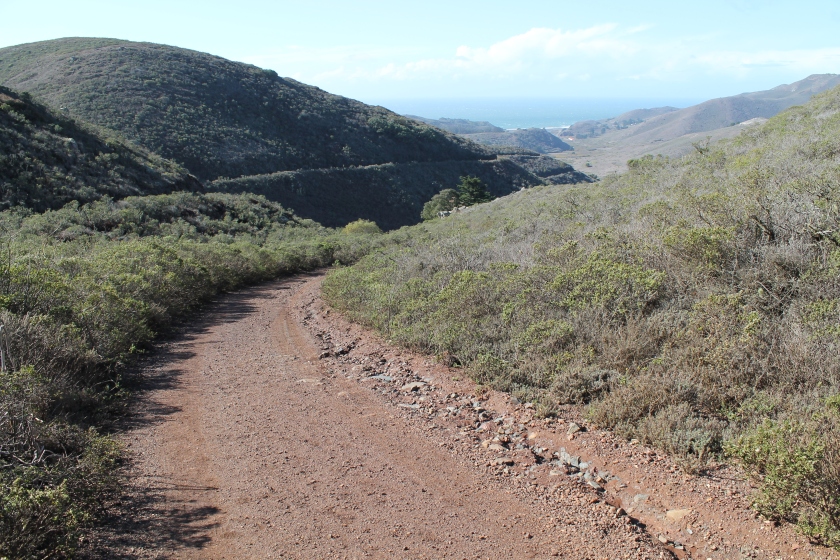 At the intersection featured below, we took the Slacker Ridge trail on the right. Notably, dogs were not allowed past this point. Later, we returned to this intersection and used the path on the left to head towards the bridge. 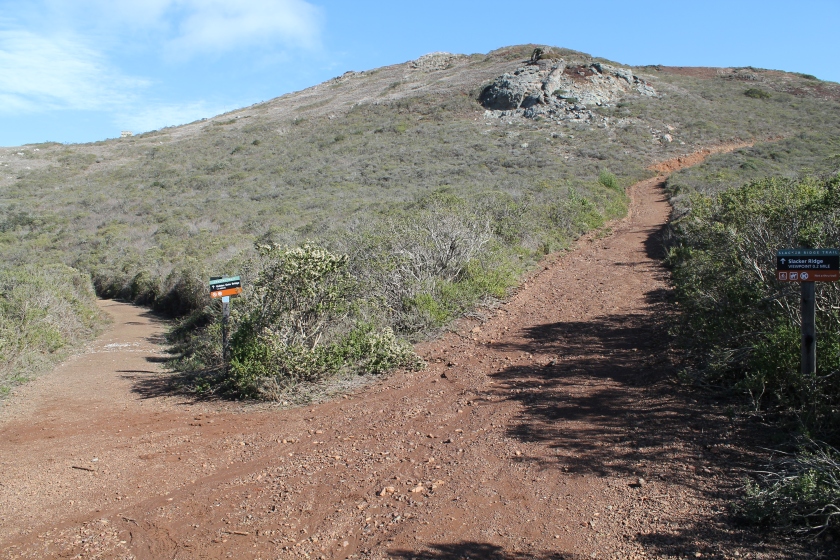 The top of Slacker Hill was a large, flat area with a 360 degree view of the bay area. 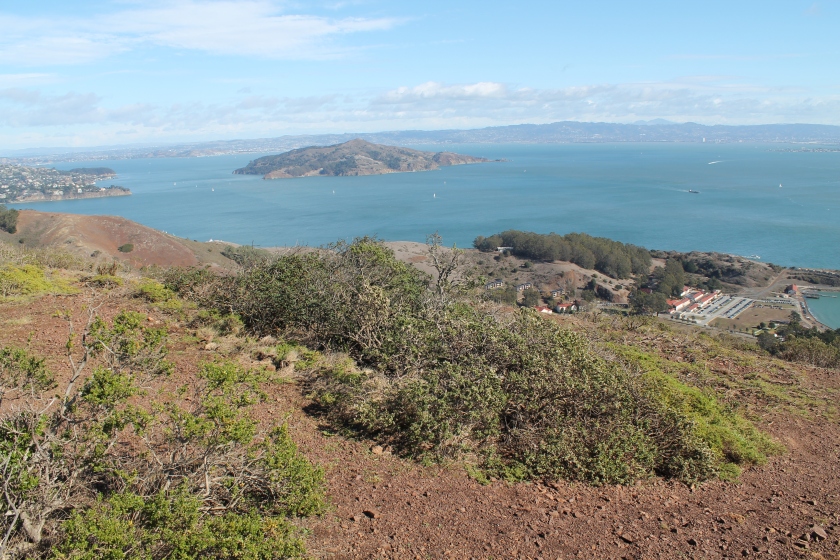 At the top, it was windy and the following video captured the intensity.

At this point, we had only hiked 0.4 miles and were itching for more adventure so devised a plan to hike down to the Golden Gate Bridge and which included two of the adults in our group volunteering to hike from the bridge back to the Slacker Hill parking area. We hiked down to the aforementioned intersection and then headed east on the Coastal trail. 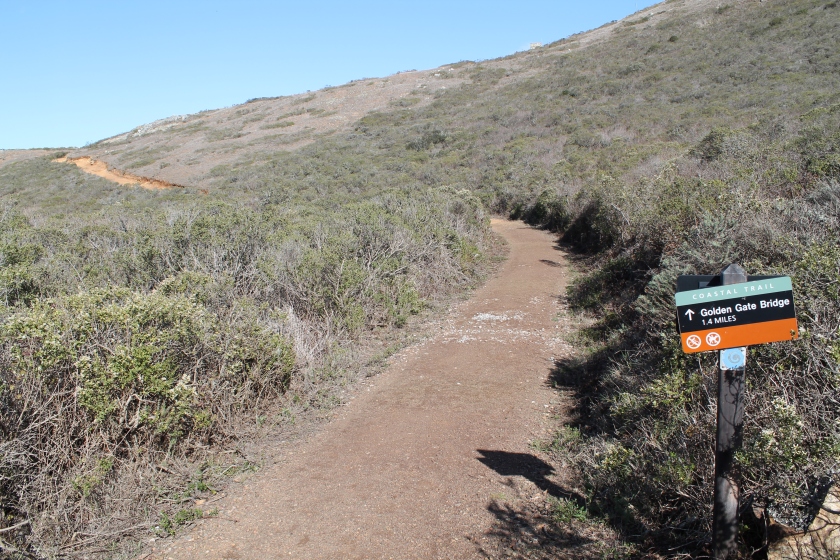 From there, we descended 700 feet over 1.4 miles. Our children did well with the descent but probably would have struggled had we done this in the reverse direction, which would have had a total ascent over 1,000 feet. The picture below shows the right turn our group made onto the SCA trail. 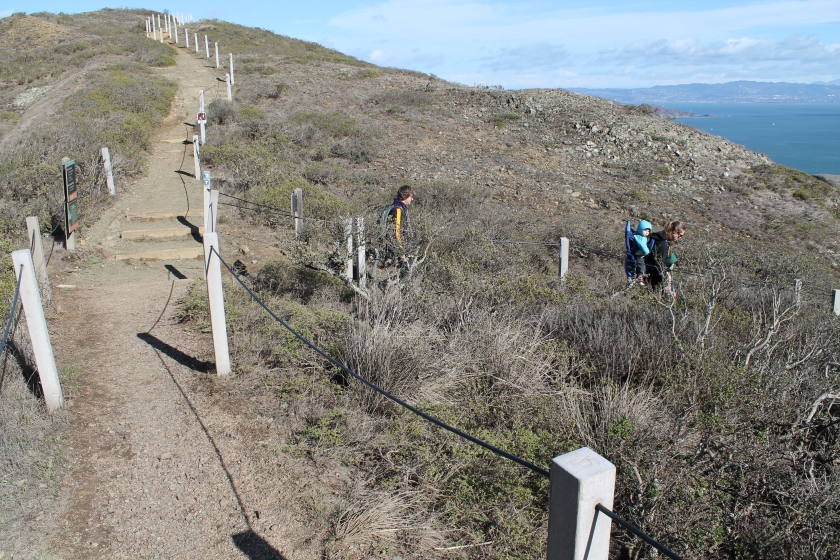 The trails on the east side of the ridge were mostly smooth but narrower. And, there was little shade on either side. 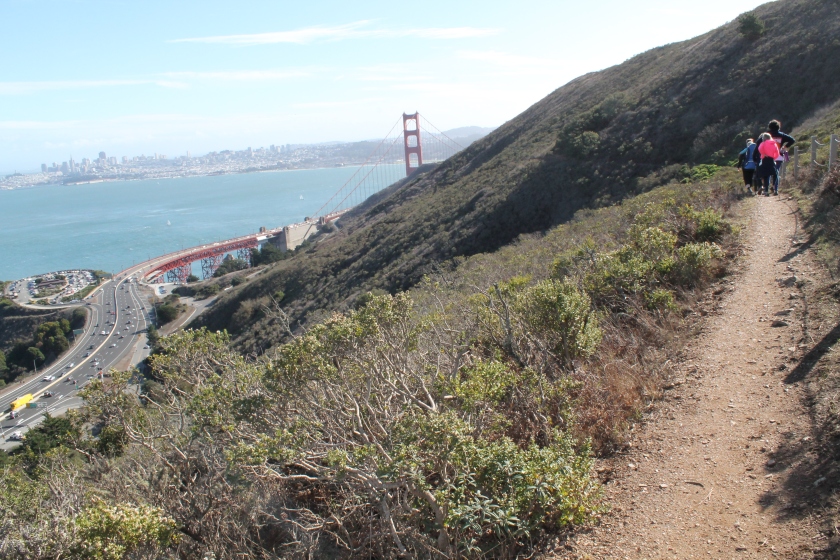 With Highway 101 and the Vista Point bustling below, we had a peaceful experience and only saw a couple of other hikers. The limited parking on both sides of the ridge explained why we saw so few people on the trail but also means we were probably lucky to have found parking for two cars. 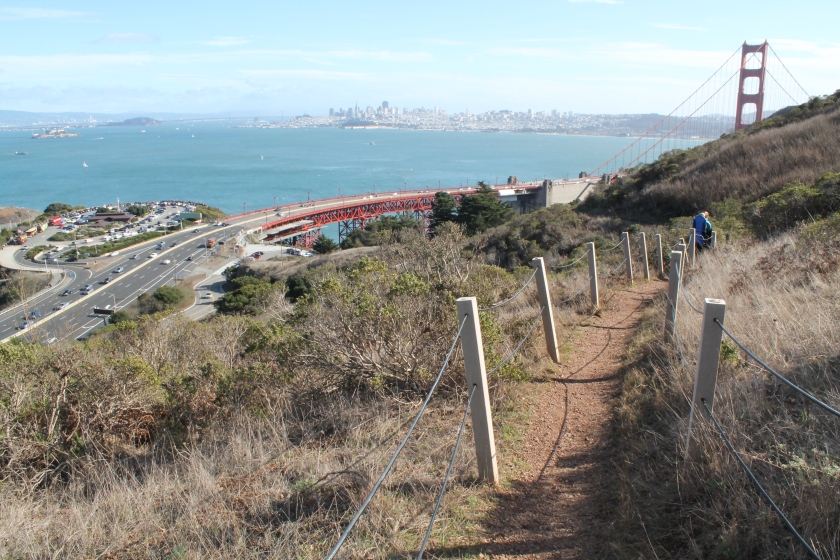 We crossed Conzelman Rd near the end of our descent. 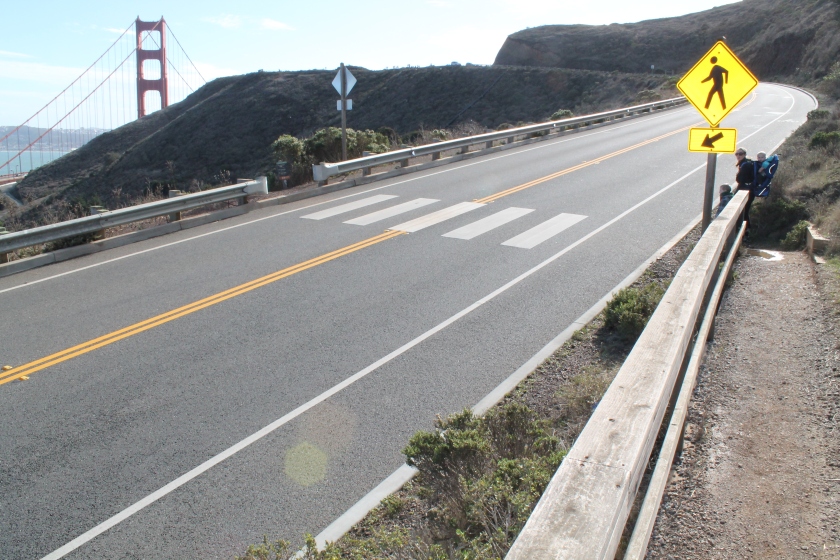 From there, we had one last switchback. 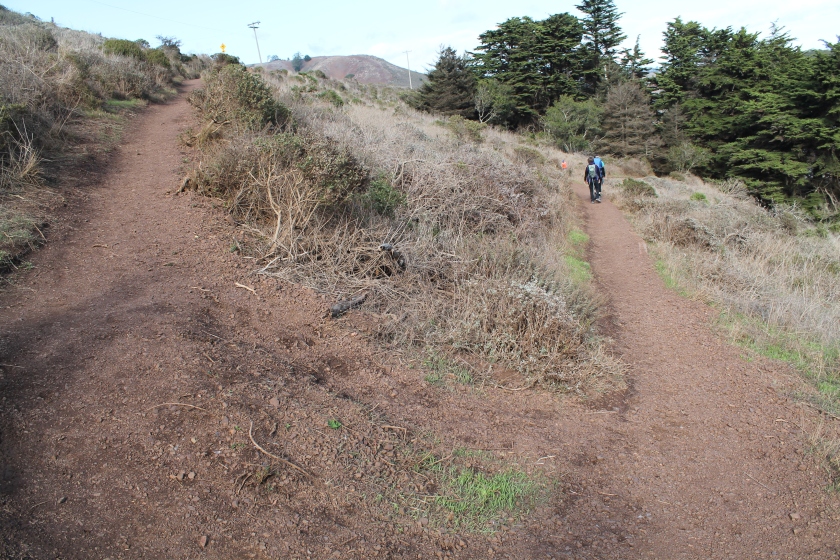 After reaching the small parking area on the west side of Highway 101, two of our adults hiked back to our cars near Slacker Hill while the rest of us walked under the highway to the Vista Point and then walked a third of a mile onto the bridge. 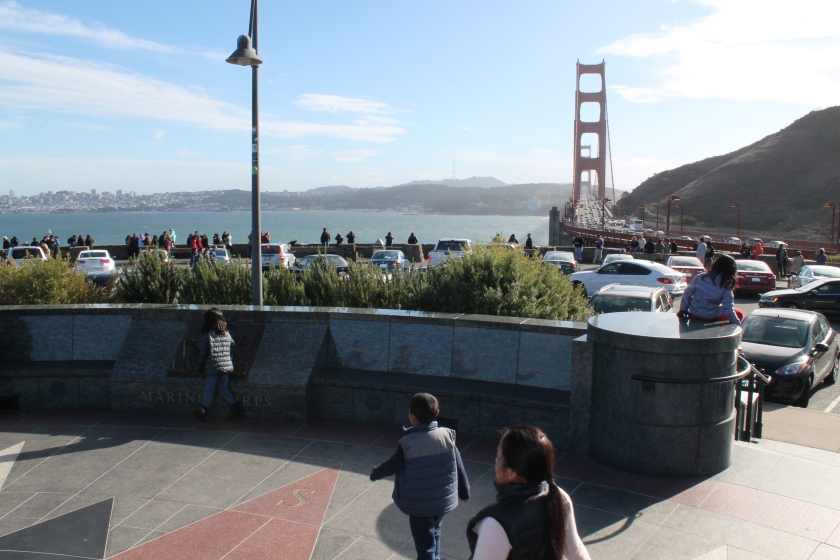 In sum, our group of four adults and three kids had a blast on this one way hike. Notably, the west to east path we took was significantly easier than if we had gone east to west. Another nearby hike we had a lot of fun on was Muir Woods.