I am just now checking the Rowdy Dawg race results and I finished 12th out of 15 beginner men with a time of 1:41:59. The winner of the beginner men’s group had a time of 1:09:47 so I’ve need to improve by 30+ minutes if I hope to compete for the top spot next year and truly earn my Two Knobby Tires sponsorship.

The 2009 Rowdy Dawg mountain bike race was a lot of fun because the race organizers did a great job setting up the course and configuring the racing groups. In addition, the weather cooperated by providing a cool but sunny October morning that left the trails dry; except for a few wet dips.

I am an amateur racer with amateur cycling gear and put in very little training so a lot could have gone wrong, but all went well. I ate a Clif Bar for Kids about 45 minutes before the race. I chose a kids bar over a standard bar so I would not fill up my stomach. In addition, I ate two PowerBar gel packets 20 minutes before the race to give me an energy boost after the first set of climbs.

From my perspective, the beginner group sorted itself out on the first hill on the Poverty Creek Trail. I saw only a couple of other riders after the first 0.5 miles. 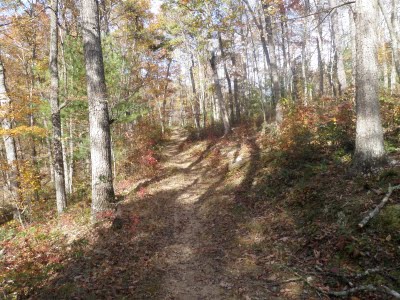 My fully rigid mountain bike and I got bounced around on the Trillium and Skull Cap trails. I was forced to dismount several times and, for short stretches, struggled to maintain momentum. I attribute my struggles to my lack of training and racing gear. In my preview of the beginner’s course, I pointed out a big jump on the Skull Cap trail where it would be really cool to have a video camera set up (jump seen in the following picture).

I got what I wished for with two guys perched down from the jump: one taking a video and one taking pictures. Unfortunately, I did not see them in time to muster up the courage to make the jump so instead I walked around it. Thus, there is an embarrassing video out there of me dismounting instead of making an awesome leap. Please let me know if you find this video.

The beginner course diverged from the sport and expert course when racers took a right turn onto the Queen Anne trail. I rode through a spiderweb on this trail which led me to believe I was really far behind the preceding racer; as it turned out I was.

The race finished fast on the Poverty Creek Trail so I felt like I was finishing strong even if I wasn’t. By the end, the sport riders were passing me with grace.

I almost had a major gear failure because the metal brackets that bind my brake levers to my steering column had come loose on both sides and by the end of the race my brake levers were pointing to the sky instead of angling down. Luckily, they didn’t completely slip until the last 50 feet; when I entered a small dip filled with mud.

In sum, the weather was perfect, the trails were in good condition, and the race organizers did a great job of making the event amateur friendly. I am enjoying the pint glass that came with my race packet and hope to participate in the 2010 Rowdy Dawg.