Elk (a.k.a., wapiti) are a species of deer and one of the largest mammals in North America. Elk spend most of the year in the sub-alpine life zone, between 10,000 and 11,500 feet in elevation. However, in September and October, they migrate down to the meadows of the lower altitude montane lifezone, between 8,000 and 10,000 feet in elevation. In Rocky Mountain National Park during the fall, they can be seen in Moraine Park, Horseshoe Park, Kawuneeche Valley, and Upper Beaver Meadows. Rocky Mountain National Park is looking for Elk & Vegetation Management Program Volunteers to help manage, monitor, and promote a thriving population in Colorado.

Bulls
Male elk are called bulls, can grow to be 1,100 lbs, and can achieve antlers weighing up to 25 lbs and spanning five feet wide. Bulls reach their peak mating status at eight to nine years old. Instead of fighting with their antlers during mating season like deer, they conserve energy and prevent injury by bugling and emitting a musky odor.They bugle during mating season to intimidate rivals. In January, long after mating season is over, bulls shed their antlers. It is important that hikers and visitors do not remove fallen antlers from a wildlife area because antlers serve as a food source for small organisms and add vital nutrients to the soil. 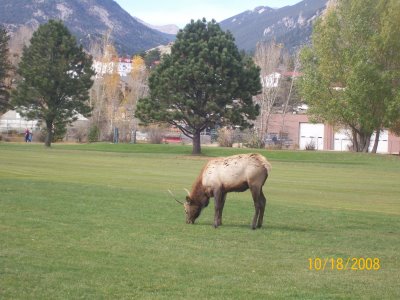 Female elk are called cows and can grow to weigh 600 lbs. Cows carry their young for a little over eight months before giving birth in late May or early June. Some of the six month old calves in the background of the following pictures can weight up to 250 lbs.

The following bull was seen walking by our YMCA of the Rockies cabin in mid-June.