Devil’s Backbone is a 2,100+ acre open space managed by Larimer County’s Open Land Program. The trailhead is 30+ minutes from Fort Collins, 5-10 minutes from Loveland, and is located off of US-34. Primary activities include hiking, mountain biking, horseback riding, and walking leashed dogs. Further, many of Larimer County’s free guided hikes take place here and some programs make use of the outdoor classroom adjacent to the parking lot. Parking is free with space for horse trailers. What’s more, the trailhead includes restrooms, water fountains, and free pet waste bags. Cell phone service was available while in the park.

The Wild Loop trail is 2.5 mile loop and climbs approximately 200 feet in elevation. The trail is a great place for kids to learn local history and geology which is why it makes my list of Best Fort Collins Hikes for Kids. Parents can make the hike interactive by picking up an “Interpretive Guide” brochure at the trailhead. The “Interpretive Guide” brochure describes the historical and geological significance of six interpretive stations located on the Wild Loop trail. There are three kinds of rocks: metamorphic (e.g., Rocky Mountains), igneous rock (e.g., Horsetooth Rock), and sedimentary rock (e.g., Devil’s Backbone). All of the rocks seen at Devil’s Backbone are sedimentary rocks. The first kind of rock to spot on the Wild Loop is Gypsum; which can be seen on the left side of the trail after crossing the second bridge. Gypsum rocks are the little white rocks seen in the following picture. Gypsum was deposited in the Triassic Period (251.0 Mya to 199.6 Mya) and is very porous because it is comprised of dead sea creatures. Alfred Wild was a businessman in the 1800s who grew hops for beer. He discovered Gypsum when the Louden irrigation ditch repeatedly absorbed water instead of transporting it. Alfred Wild did well selling Gypsum because it was, and still is, used to make plaster and dry wall for home building.

The next geological feature to notice on the Wild Loop trail is the sedimentary rocks that protrude at an angle. The protruding rocks in the following picture are from the Triassic period. 65 million years ago, the sedimentary layers at Devil’s Backbone were uplifted to form a mound/hill. What remains, are exposed layers of sedimentary rocks. 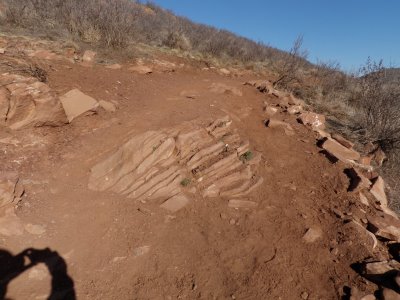 Across the valley to the east and behind the homes, lies a matching set of sedimentary rock layers. The eastern sedimentary rock layers (i.e., behind the homes) and western sedimentary rock layers (i.e., Devil’s Backbone) used to be horizontally continuous layers before they were uplifted and then eroded into the valley that exists today. Because of the uplifting, the rocks seen on the trail transition from oldest to youngest as you climb in elevation on the Wild Loop trail. The transition from oldest to youngest is an example of the law of superposition which states that younger rocks should be on top of older rocks. 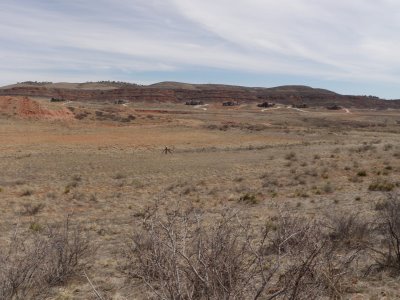 In addition to growing hops and mining for Gypsum, Alfred Wild found clay at Devil’s Backbone and used the clay to make bricks. The bricks below the bench at interpretive station #2 were left over from Alfred Wild’s estate. 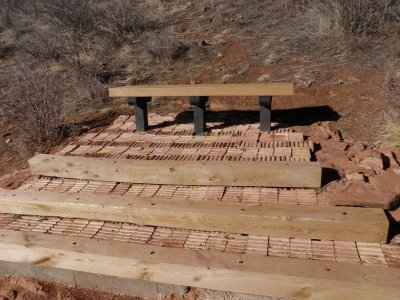 The red mounds in the following picture are not natural because they were created during the mining of Gypsum.

Western Half of Wild Loop – Keyhole

The western portion of the Wild Loop is only accessible by hikers and includes a small climb in elevation (~200 feet). The following picture shows a transition from the red sandstone of the Triassic Period to the soft, gray rock of the Morrison formation from the Jurassic period (199.6 Mya to 145.5 Mya). There are a lot of fossils found in the Morrision formation because this sedimentary layer was formerly a wet swamp land that formed soft rocks able to preserve fossils. In fact, a prehistoric elephant with five foot long tusks was found at Devil’s Backbone.

If the Keyhole is closed then you can get a similar view from the overlook that is located off the western half of the Wild Loop and just south of the Keyhole. What’s more, the overlook is a suitable place to relax and eat lunch because it has a couple of benches.

The highlight of the Wild Loop trail is the Keyhole located on the western half of the loop. The Keyhole is the highlight because it is an opening in the ridge that provides a view to the west that include Longs Peak, Twin Sisters, Mount Meeker, Storm Peak, and Bald Mountain. In addition, it has benches and shade that make for a pleasant picnic spot. For this summit-less hike, it was nice to have a scenic destination as is seen in the following picture. However, it should be noted that the Keyhole is typically closed from March to June to protect raptors (e.g., Ravens, Prairie Falcons) that are nesting. The Keyhole was created by two weathering forces: wind and ice. Wind coming from the west puts pressure on rocks along the edge of a hole because wind has no where else to go when running up against a wall of rock such as Devil’s Backbone. In addition, ice breaks up rocks on the Devil’s Backbone because the sedimentary Dakota Sandstone is porous and aborbs water when it rains. Subsequently, the sandstone can be cracked if the absorbed water freezes into ice since water expands when it freezes.

East Half of Wild Loop Trail

In sum, Wild Loop trail is fun for hikers of all ages and skills levels, but is an especially good fit for young children ages 6 and up because of its rich local history and stunning geological features.