The interior of my 2009 Honda Fit hauls my mountain bike which eliminates my need for a bike rack and/or hitch. I haven’t tried it but I believe it will hold two mountain bikes at once. My Niner SIR 9 and Giant Boulder both fit comfortably by putting down the back seat, removing the bike’s front wheel, and wedging the rear wheel next to the driver’s seat.

I use a Nite Ize Gear Tie to secure my bike seat post to a handle above the rear passenger seat so that the bike won’t slide back and hit the rear window and/or fall over.

The Honda Fit’s backseat folds down completely to create a level surface that stretches from the driver’s seat to the rear of the car. It is the level surface that allows a bike to stand vertically whereas the backseat in some cars only folds down partially which means a bike has to awkwardly lay on its side. In 2014, I traded in my Fit for a 2014 CRV. The CRV also transports my Niner SIR 9 even though the backseat doesn’t fold down flat. It took a few iterations but I’ve settled on the following configuration whereby I flip my bike upside down. 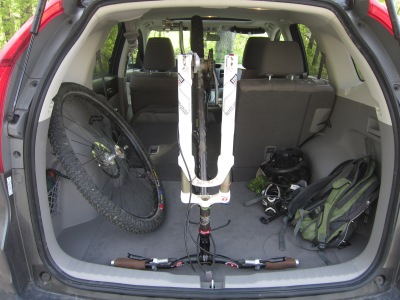 I use a Nite Ize Gear tie to secure the handlebar stem to the floorboard’s pull-string. I carefully close my trunk door and, so far, my bike has remained stable.