Garden of the Gods is a national natural landmark located in Colorado Springs, Colorado on the corner of North 30th Street and Gateway Road. Primary activities include walking, hiking, rock climbing, mountain biking, and horseback riding. The visitor center and central area garden include restrooms and water. Parking is free but can be limited so plan to be flexible with where you park. Cell phone service was strong while in the park.

Garden of the Gods Visitor and Nature Center

The visitor and nature center includes exhibits that illustrate the region’s geology, ecology (plants and animals), and natural history (dinosaurs). The following is an example of a hands-on exhibit that teaches how to identify rock formations in the park.

The following is a view of Garden of the Gods from the visitor center. 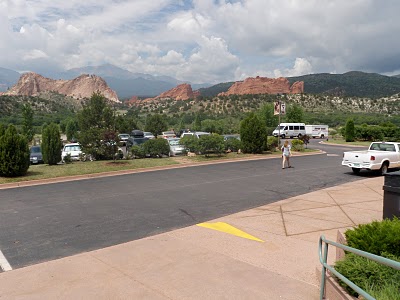 We started at the north main parking lot and walked around the Perkins central garden trails. The central garden trails meander around several large rock formations and include interpretative signs that explain their natural history. The walk through the central garden area is on paved walkway at around 6,400 feet in elevation and is very accessible. The Garden of the God’s popularity and accessibility can make it feel like a zoo; where pretty much anything goes. For example, we witnessed a toddler riding around in his very loud big wheel bike while we attempted to have a relaxing snack. We visited on the last Sunday in July 2009; which is likely one of the busier days of the year. 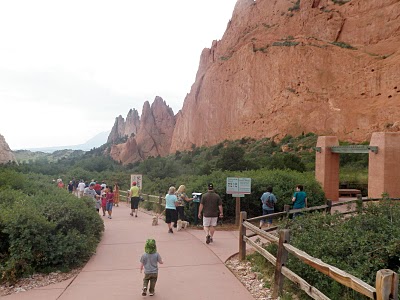 An amazing aspect of the park is the ease with which different layers of sedimentary rock can be seen from a single location. Layers of sedimentary rock seen in the park are the result of deposits from ancient beaches, rivers, and seas. 65 million years ago, the area experienced an uplift that bended the layers of rock and exposed them to weathering and erosion. The following picture shows a sandstone formation on the left and a limestone formation on the right.

Another fun aspect is that there are several spots where you can walk right up and touch the rocks. Notably, some of the rocks in the park are up to 300 million years old.

The following video was taken from the north main parking lot.

We decided to take a break from the crowds and explore the Palmer trail. We accessed the Palmer trail from the western edge of the central garden area by crossing Juniper Way and then hiking one way to the northern main parking lot. 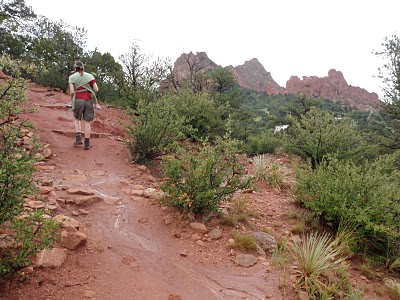 It is a an easy ridge line hike through the western and northern areas of the park. It provides a tranquil experience with the garden’s beautiful rock formations as the backdrop. I do not remember the length of the trail but I estimate it to be about a mile with change in elevation less than 200 feet.

Along the Palmer trail, we saw True Mountain Mahogany, Plains Prickly Pear Cactus, and Great Plains Yucca. In addition, bighorn sheep can sometimes be seen to the north.

In sum, Garden of the Gods is a great place to learn about Colorado’s geology by both sight and touch. In addition, it is very accessible so everyone can have fun there. However, it is also a very popular destination that can be swarming with visitors and, thus, the central garden area may not be very relaxing. Other Colorado hikes with similar accessibility include:

2 thoughts on “Garden of the Gods Park near Pikes Peak, Colorado”