The following is a short list of Colorado’s wildlife that we have learned about. We do not have a picture of a black bear but do have pictures of elk, gray jays, and Rocky Mountain bighorn sheep. Click on the name of each animal to learn more.

Colorado Black Bears – Black bears are the only bears to reside in Colorado, are strong swimmers, and can run 35 mph. We have never seen a black bear on the trail but recommend that you read literature on what do in the event that you encounter one. The linked blog post shares what we have learned from others and includes tips for hikers, mountain bikers, and campers.

Elk – In Rocky Mountain National Park during the fall, elk can be seen in Moraine Park, Horseshoe Park, Upper Beaver Meadows, and Kawuneeche Valley. In addition, we have seen elk roaming the YMCA of the Rockies property in late June. Unlike deer who fight with their antlers during mating season, elk bulls conserve energy and prevent injury by bugling to intimidate rivals. 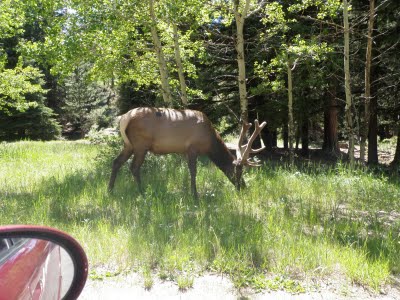 Gray Jay– We have encountered gray jays a couple of times while snowshoeing at altitudes ranging from 10,000 to 11,000 feet. Most of our pictures were taken at Emerald Lake in Rocky Mountain National Park while on a snowshoeing outing that began from the Bear Lake trailhead. Interestingly, gray jays are a year-round residents of the subalpine zone of Colorado’s Rocky Mountains and not afraid to approach humans for food (but please do not feed them).

Rocky Mountain Bighorn Sheep – Colorado is home to more bighorn sheep than anywhere else in the world and, aptly, it is the state’s official mammal. Remarkably, they have pliable hooves that help them ascend steep rock faces where predators are unable to follow. Unlike deer that shed antlers, bighorn sheep do not shed their horns and, thus, horns can be used to identify a sheep’s relative age within its group.